In the junior women category Amanda Wakeling continues to shine in 2nd place.

Jordan Duncan and Nigel Ellsay round out the junior mens podium.

And Andrew Grant takes a well deserved win after a long race season starting in March of this.

Steve Grant survived the master men 50+, while James and Mark Grant finished 4th and 6th behind their brother Andrew in the U17 MEN.
Posted by Comox valley Cycle Club at 7:21 AM No comments:

The clubs Amanda Wakeling dominates yet again.
From the "Cross on the Rocks" Vancouver Island Cyclocross series

Most Improved Female - Amanda Wakeling. After a great rookie season two years ago, where she dominated the women's beginner category at 13 years old...last year Amanda was 11th in the Open Women for the series. A few DNF's. Sickness and some sub-par results. This year she came back and got stronger towards the end of the season and placed third overall for the series. All at 15 years old. Plus she was the youngest female at National Champs racing the elite women. 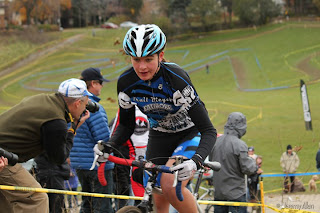 Youngest female at nationals!
If your not following Amanda's Blog, do it.
And the canadian cyclist article about cross on the rocks
Sorry for the terrible post title, it was the best that i could come up with.
Posted by Comox valley Cycle Club at 1:21 PM No comments:

AGM business meeting called to order on or about 8:00pm :

Financial report – Hilary Grant. Income statement and Balance sheet provided noting that reports will be finalized after all dinner/award/AGM expenses are tallied. Discussed that revenue and expenses approximately balanced out for the year.

Election of Officers for 2011 took place with the following results:

Club President explained the intent to have a separate race director for each event in 2011 as to distribute the heavy workload put upon a single race co-ordinator. Request for volunteers to be race directors will be made in the new year.

Meeting adjourned on or about 8:30pm.
Posted by Comox valley Cycle Club at 1:12 PM No comments: