Under clear skies and rising temperatures 25 riders lined up for the return of the Trail Bikes Mt. Washington hill climb. The regional level event featured a bunch of local riders, triathletes, and some riders coming up from Victoria for the 16.7km hill climb. Immediately from the start a select group of 5 rode away from the rest as local riders Jordan Duncan and Doug Merrick (Team Trail Bikes Eatmore Sprouts) rode valiantly to try to limit their losses as the select group rode on. In the dash to the line, Victoria rider Bruce Schlatter pipped team H&R Block rider Mathew O'Hagan to take the fastest time of the day in 49:23. Visiting triathlete Tenille Hoogland put in a major effort to take top honours as fastest female rider after making up serious time in the latter half of the race.
In the junior race 5 local racers lined up to race the final 7.5km to the top. Right from the start James and Mark Grant (Team Trail Bikes Eatmore Sprouts) jumped away to take the lead and ride together, in the closing kilometres older brother James powered clear to take the fastest male junior award. Behind the Grant duo Jessica Reynolds, and brother-sister combo Isaac and Kia Van der Vliet battled it out. In the closing kilometres Jessica rode clear with Kia in close pursuit as Isaac powered on to finish right behind his older sister. Jessica took the fastest female junior award.


results
A BIG thanks to all the volunteers, Mt. Washington, the DH Skateboarders, and Trail Bikes!
D 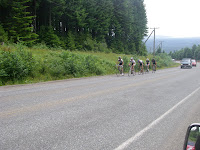 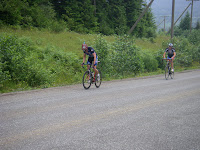 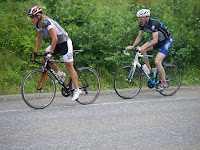 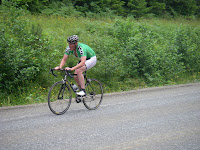 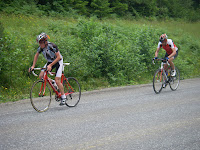 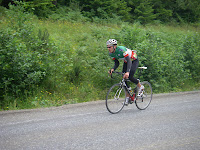 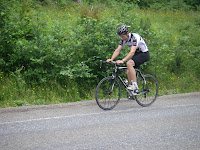 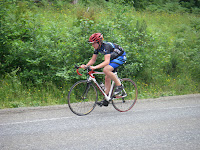 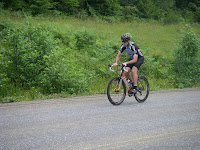 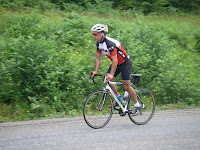 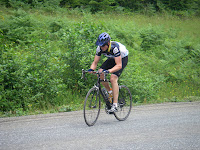 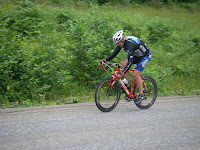 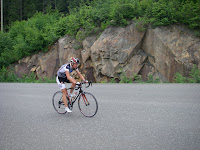 Posted by Comox valley Cycle Club at 5:32 PM No comments:

2011 Mt. Washington Hill Climb
Present by Trail Bikes
Registration opens at 10am at the Dove Creek-Farnham Road intersection (take exit 130 off the Inland Island Highway).
Registration closes at 1145am.
Cost: $20 cat 1,2,3,4,5, novice.
$10 junior rider
Parking: Will be along Farnham Road and Dove Creek Road. No parking on Strathcona parkway. There is no bathrooms at the staging area, only at the finish!
Cat 1, 2,3,4,5 novice riders will race the full 16.7km course, junior riders will ride the final 7.5km of the climb.
This is a CyclingBC regional level race, upgrade points are on offer!
The race starts at noon, with riders doing a neutral rolling start from the staging area on Farnham road to the intersection of Strathcona Parkway/Duncan Bay Main. From there the riders will be treated to the toughest hill climb in the province as the road winds up to top with stunning vistas over the average gradient of 8%.
After the race, all riders will descend back to the staging area on Farnham Road for results and draw prizes.
Over $500 in prizes on offer.
Awards for fastest male and female, and fastest male and female junior riders!

Posted by Comox valley Cycle Club at 9:41 PM No comments:

Hi Everyone
The 2011 Dove Creek Omnium Presented by Brian Mclean Chevrolet and Broken Spoke  and supplementary prizes from Courtenay Shoppers Drug Mart, the Blackfinn restaurant, and Quality Foodsh had a total of 56 riders in the four categories lined up for the 3 events.
Saturday mornings Dove Creek Time Trial was won by Don Gilmore in 21:18 over the 16.5km course.
Derek Tripp won the B, Mark Grant in the C's, and Isaac Van der Vliet in the C's.
Full results here
Saturday afternoons Half Mt Washington HC in the mist was won by Steve Bachop with a 1:42 second gap over 2nd place Simon Tremblay with a time 29:34. Derek Tripp, Mark Grant, and Jessica Reynolds won each of their respective categories in the mist covered mountain.
Full Results here
Under clearing skies the Sunday morning Dove Creek Road Race A category raced 87km, B 71km, C 54km, and Cadet with 21km.
In the A category road race 23 riders lined up for a fast, surging, and surprising race that featured a large contingent of out of town riders. Despite the numerous attacks and counter-attacks the group stayed together to the very end. Steve Bachop and Doug Merrick (Trail Bikes Eatmore Sprouts) attacked early on the climb to open up a gap, Steve Bachop sprinted away for the win as a charging Warren Muir closed the gap before taking 3rd.


In the B category, a season high 20 riders lined up for 4.5 laps around the Dove Creek course. Overall, it was a very coecive group effort, tapping out an average speed of approximately 37 km/hr. Rhonda Callendar looked strong, setting the pace on the majority of the up-hill sections, with the peloton quickly reacting before a break away could be establish. In the end, masters rider, Bill Yearwood out sprinted the majority of the group to take the win as Duane Martindale and Mike Sevcov rounded out the podium.


In the C road race a mix of young and veteran riders lined up for the 3.5 lap race. On the last lap Kia Van der Vliet and Mark Grant (Trail Bikes Eatmore Sprouts) broke away to work together for the last lap. In the final charge up the hill, Mark Grant Pulled away to take his 3rd win of the weekend over Kia. Ernie Klassen rounded out the podium after managing to get away from the rest of the group.

In the Cadet race three young riders aged 10-12 lined up for a fast, and suprising finish as Max Andrew, in his first road race ever, took the sprint over Isaac Van der Vliet, Jessica Reynolds suffered a dropped chain to take third.
Full results here 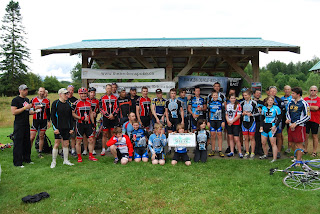 A Big thanks to everyone who came out; the volunteers, race directors, master riders, and out of town riders!
Posted by Comox valley Cycle Club at 5:18 PM No comments:

Hi
TT results
HC results
RR Results
Overall so far.
Find any errors? im going to bed, talk to me before and after the race tomorrow.
D
Posted by Comox valley Cycle Club at 9:17 PM No comments:

Hi Everyone
Both Brian McLean Chevrolet Buick GMC and Broken Spoke have become major sponsors of the club for the Dove Creek Omnium! Thanks to there support for the junior program and the great selection of prizes to be had next week!
D
Posted by Comox valley Cycle Club at 9:29 PM No comments:

On Saturday, July 23 come test yourself on the Mt. Washington Hill Climb.With an average gradient of 8% over the 16.26km course allows riders to take in the stunning vista as they climb one of the toughest mountains in BC!
Registration opens at 10am with racers off at noon!
This is a Regional Level Event with CyclingBC upgrade points on offer!
All categories available, as well as junior!
Junior categories is U17 m/f and will race the final 10.1km
Cost: $20
Juniors: $10
Tons of Draw Prizes!
Past results: 2008, 2008, 2007, 2007, 2007, 2006
Fastest time: 2007-Trevor Connor 47:47
Registration and start line at Duncan Bay Main and the Strathcona Parkway!

Posted by Comox valley Cycle Club at 2:03 PM No comments:

Hi Everyone
On the roster for CyclingBC Western Canada Summer games held in Kamloops this August is Trail Bikes Eatmore Sprouts riders Amanda Wakeling, Nigel Ellsay and his younger sister Gillian Ellsay, and Jordan Duncan.
At the 2011 Road Nationals junior TT a tough course with plenty of wind and rollers, Nigel Ellsay took second on the course, while Jordan Duncan took 29th with just over 3 minutes down on the 21.5km course. The RR is on Sunday!
The club led out the 5th street mile today with over a dozen riders showing up to clear the way. An excellent showing by the club! 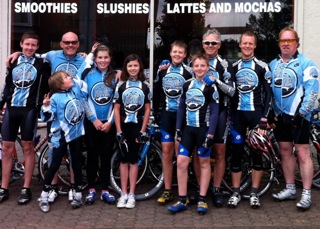 and there will most likely be another posting this weekend about Nats.
Posted by Comox valley Cycle Club at 1:01 PM No comments: